Your eyes saw my unformed substance; in your book were written, every one of them, the days that were formed for me, when as yet there was none of them.
– Psalm 139:16

Euthanasia is the word we give to measures taken to end a life either by stopping treatment (passive) or by direct acts causing death (active). Passive euthanasia is legal and is less controversial – this is usually simply making the decision not to keep someone ‘artificially alive’, like turning off a life-support machine. Active euthanasia is much different and is what this blog seeks to address. It is the direct action, usually of a medical professional, to end a life prematurely, normally because the patient has requested it.

In January 2015, a bill that would legalise some forms of euthanasia in the UK failed. Not because of a lack of interest or support, but because Parliament ran out of time. Now, the Assisted Dying (No 2) Bill is being debated in the House of Commons, having its second reading this Friday, 11th September 2015.

The Archbishop of Canterbury, Justin Welby, along with other faith leaders, has written and spoken out against the bill, and you can read the Archbishop’s letter here. He makes three main, excellent points, in short:

What About The Church?

The Archbishop makes excellent points to a secular audience, which should also have great sway over the opinions of believers of all faiths up and down the country. But what does the God of The Bible say? What are bible-believing, evangelical Christians to believe and do in response to this bill and this cultural shift?

God is God and We Are Not

First of all, we must acknowledge that if we believe in a God who has revealed Himself through His Word in the Holy Bible, we must also acknowledge that what He says goes. He is Creator and we are creature. He is Lord, we are servants. He is King, we are subjects. He is Saviour, we are the saved.

Proverbs 14:12 says, “There is a way that seems right to a man, but its end is the way to death.” This is perhaps no more literally represented in our day than in the issues and consequences surrounding the sanctity of human life in euthanasia.

So What Does God Actually Say?

Why Is This So Important?

If obeying God, just because He is God isn’t enough of a reason. We have to consider the slippery slope. This bill being passed would represent a wedge opening the door that could and almost certainly would lead to (among other things):

In July 2013, my wife and I travelled to Berlin for a holiday. We visited the Topographie Des Terrors (the holocaust museum and memorial on the site of the old SS Headquarters). On the walls were propaganda from the nazi regime and I wanted to include one for you: 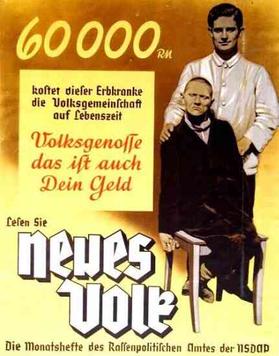 The “60,000” is the cost to the state for caring for the disabled person in the picture. The nazis called this man a “life unworthy of life”.

“Silence in the face of evil is itself evil: God will not hold us guiltless. Not to speak is to speak. Not to act is to act.”

So, act now, speak now, pray now, write to your MP now but whatever you do, don’t do nothing.

Photo via The Guardian