In December, we had a particularly bad run with cars…

We had sold our 7-seater after it had broken down on me, and bought a 5-seater. Shortly after, our other car broke down (with a problem that had apparently never happened before meaning the burnt out part—which had no number—had to be shipped to South Korea for investigation) and to top it all, Ed’s parent’s car (that we normally borrow if we’re stuck) ended up in the garage needing a new part. As our car was under warranty Ed asked the garage about a courtesy car, only to be told that there were none available as all were booked out and they wouldn’t have released one (even if they had one) until the part had a number and they were able to know how long it would take to fix.

I did some research (convinced that we were entitled to a car as our car was under warranty) and discovered that the garage was under no obligation to give us a courtesy car, and so it seemed there was nothing we could do… So overnight it seemed we went from 12 seats to 5 seats… We could just about get around with one car, but were finding it a struggle to get to church, and get our friends to church too, as we often take extra people on Sundays and have people over for lunch. After a few days of trying to work it all out, it started bugging me. I really believed that God didn’t want us to struggle for another week getting people to church and so I started to pray. I wasn’t sure if I should be asking God to help me, perhaps it was his will? Was there something we needed to learn? I began pondering, and thinking of principles from the Bible that may be relevant, I remembered verses like “God longs that none would perish” (Matthew 18:14) and “He longs to give good gifts to his children.” (Luke 11:13)

I thought about the story Jesus told of the persistent widow, and many more… Something inside of me felt convinced that God would want us to get people to church, so I kept praying, and… I am convinced that what happened next was God’s answer! You can argue otherwise, and it may seem a small thing, but I tell the truth… the very next day we received a phone call from our garage offering us a courtesy car, and not only that, they delivered it to our very door! 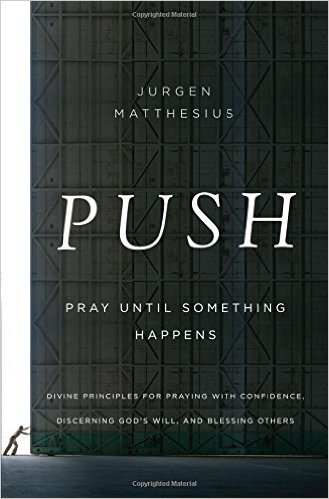 Now I am not saying that God always answers yes to our prayers, or that if you don’t get the answer you want it is your fault, but I believe from reading God’s word that God wants us to bring him our petitions and spend time talking with Him, and yes to keep praying, even when we want to give up. Last year I read the book PUSH by Jurgen Matthesius; if you haven’t read it I encourage you to get hold of a copy. I was both challenged and inspired. The author shares stories, as he talks about not just going along with the status quo, not just accepting what life throws at you, but pushing through in prayer and expecting God to move.  Just before Christmas, after reading this, I believe God gave me the opportunity to do some pushing myself…

My story may seem a small thing in the grand scheme of life, but what if it’s true for the big things and the small things? What if God is just waiting for us to ask? The Bible says we are to pray on all occasions, we can ask God for anything; is anyone among you in trouble? Let them pray. Is anyone happy? Let them sing songs of praise (James 5:13); The LORD is near to all who call on him, to all who call on him in truth. (Psalm 145:18)

What if the majority of prayers that don’t get answered are the ones we never pray? At the beginning of this New Year, will YOU DARE to start pushing through in prayer?

Why not begin this very week as we think about our 2017. Here are some ideas to get you started as you begin to Pray Until Something Happens…

As you think about these and other suggestions make some notes and pray about what God would have you ask him for. Start Pushing Through, and see what God can do!

12Not that I have already obtained all this, or have already arrived at my goal, but I press on to take hold of that for which Christ Jesus took hold of me. 13Brothers and sisters, I do not consider myself yet to have taken hold of it. But one thing I do: Forgetting what is behind and straining toward what is ahead, 14I press on toward the goal to win the prize for which God has called me heavenward in Christ Jesus.

Will you press on? I am so looking forward to hearing all about the prayers you have answered and what God does in and through you this year!

If you want to order the book PUSH you can do so at Resources or through Amazon.