Most people still think of ‘slavery’ as something from the past – an evil practice that’s been safely abolished and consigned to history. But there are actually more people trapped in slavery today than at any point in human history.

Modern slavery is thought to be the world’s third-largest criminal enterprise. It is a hidden crime, but the best estimates suggest there are 40.3 million people in forced labour, forced marriage, sexual exploitation and domestic servitude (Source: International Labor Organization, Sept 2017).

The most recent UK Government estimate is about 10,000 to 13,000 victims in the UK, The National Crime Agency has since said the figure is in the tens of thousands. One academic study based on sampling suggested the figure could even be as high as 136,000, but the truth is it's impossible to know for sure because this is such a hidden crime.

Understanding trafficking in the UK

Hope for Justice helps victims of trafficking who have been tricked or forced into these situations and kept there through violence, fraud or coercion, and often end up living and working in abominable conditions.

Some are beaten and abused; others have threats made against their families in their home countries. Many are forced into fraudulent ‘debt bondage’, with their wages kept by a trafficker to pay non-existent bills for their travel, accommodation or food. They are told they will be deported if they go to the authorities.

Often, the trafficker takes control of a victim’s identity documents (e.g. passport). They accompany them to open a bank account, then take control of its associated bank card and correspondence (this functions both as a simple way for the trafficker to control the victim’s earnings, and a way for them to exert dominance and control by offering occasional small sums of money from what should be the victim’s own money).

Traffickers usually focus on those easiest to exploit, which tends to be people with fewer resources or existing vulnerabilities.

Hope for Justice works from more than 30 locations across five continents: in England & Wales, Scotland, the USA, Cambodia, Norway, Ethiopia, Uganda, Zimbabwe, Vietnam and Australia. Its global head office is in Manchester, UK and it has four other locations in the UK: West Yorkshire, the East Midlands, Lancashire and Scotland. 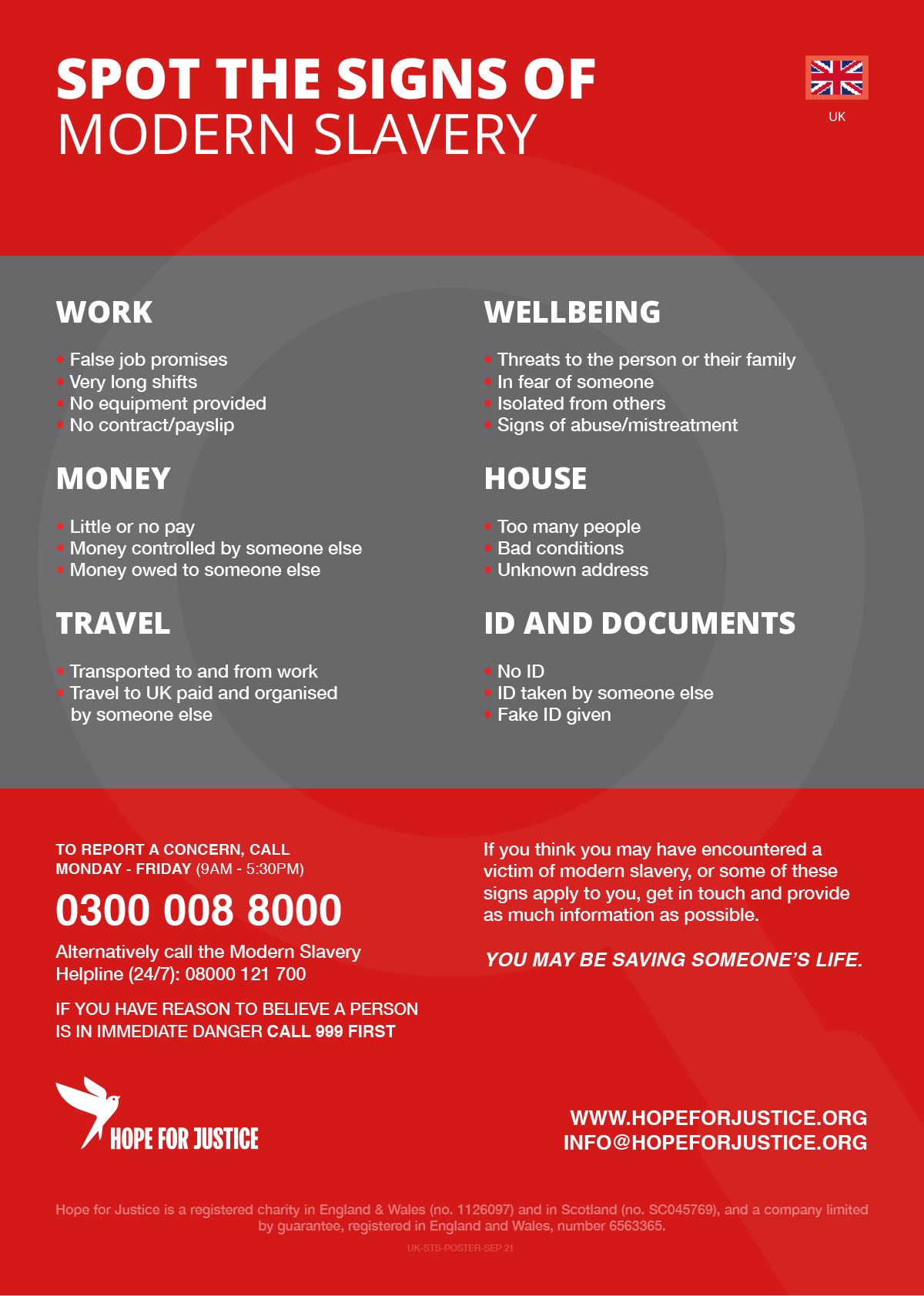 Hope for Justice’s work around the world is split into four core strands:

PREVENTING EXPLOITATION: Outreach teams, self-help groups and community initiatives empower people to protect themselves and their families from predatory traffickers and their recruiters.

RESCUING VICTIMS: Investigators work with police and other agencies to identify victims of modern slavery, build bridges of trust with them and remove them from exploitation.

REFORMING SOCIETY: Hope for Justice trains frontline professionals – including police, NHS, homeless shelter staff, NGOs, community groups and many others – to spot the signs of modern slavery and to respond effectively. Hope for Justice also seeks policy change through governments and the media.

How can I get involved?

We'd love to encourage you to get involved in one of four ways:

If you're interested in finding out more, fill out the form below and one of the People Matter team will be in touch with you.